BEAUTY of Music | Rhapsody in Blue

When the clarinet glissando announced the beginning of George Gershwin’s Rhapsody in Blue on February 12, 1924, little did the audience in Aeolian Hall realize they were witnessing a landmark in American cultural and music history. Aeolian Hall was an 1100 seat concert hall in midtown Manhattan in New York City, located on the third floor of piano manufacturer Aeolian Company’s building constructed in 1912 on West 42nd Street across the street from Bryant Park. “An Experiment in Modern Music” was the name of the program led by popular bandleader Paul Whiteman, and the concert was intended to be an educational demonstration on the progression of American music and an exploration of how jazz could be performed in concert halls. There were 26 separate musical movements on the bill and Rhapsody was second to last. That additional time might have been useful!

Gershwin began writing the score only weeks earlier on January 7. Concurrently working on the Broadway production “Sweet Little Devil,” he delivered an incomplete score to Whiteman’s pianist and chief arranger, Ferde Grofé on February 4. From the Saturday Evening Post:

The Rhapsody included several virtuoso passages for the piano that, at the time of performance, only existed in Gershwin’s head. At one point, when he played solo, he simply left a blank space in the score, indicating the orchestra was to remain silent. The only cue Whiteman had to prompt the orchestra to start playing again was a note in the score telling him to wait until he saw Gershwin nod his head.

After the premiere, Grofé revised the score and made new orchestrations in 1926 and 1942, each time for larger orchestras. The 1942 version for full symphony orchestra is scored for solo piano and an orchestra consisting of two flutes, two oboes, two clarinets in B♭ and A, one bass clarinet, two bassoons, two alto saxophones in E♭, one tenor saxophone in B♭; three French horns in F, three trumpets in B♭, three trombones, one tuba; a percussion section that includes timpani, one suspended cymbal, one snare drum, one bass drum, one tam-tam, one triangle, Glockenspiel, and cymbals; one tenor banjo; and strings.

Rhapsody has since become one of the most popular American concert works of all time and is played by both jazz and classical pianists. We interviewed three American Pianists Awards winners about their relationships with the piece.

Drew Petersen is the winner of the 2017 American Pianists Awards and has launched his career playing works from classical composers including Franz Liszt, Frédéric Chopin and Sergei Prokofiev. He has also recorded an album of 20th and 21st century American composers. Yet, Rhapsody is the piece he has been asked to play the most. He explains his relationship to the piece and thoughts about performing with the Indianapolis Chamber Orchestra and live dance by Dance Kaleidoscope in this video interview: 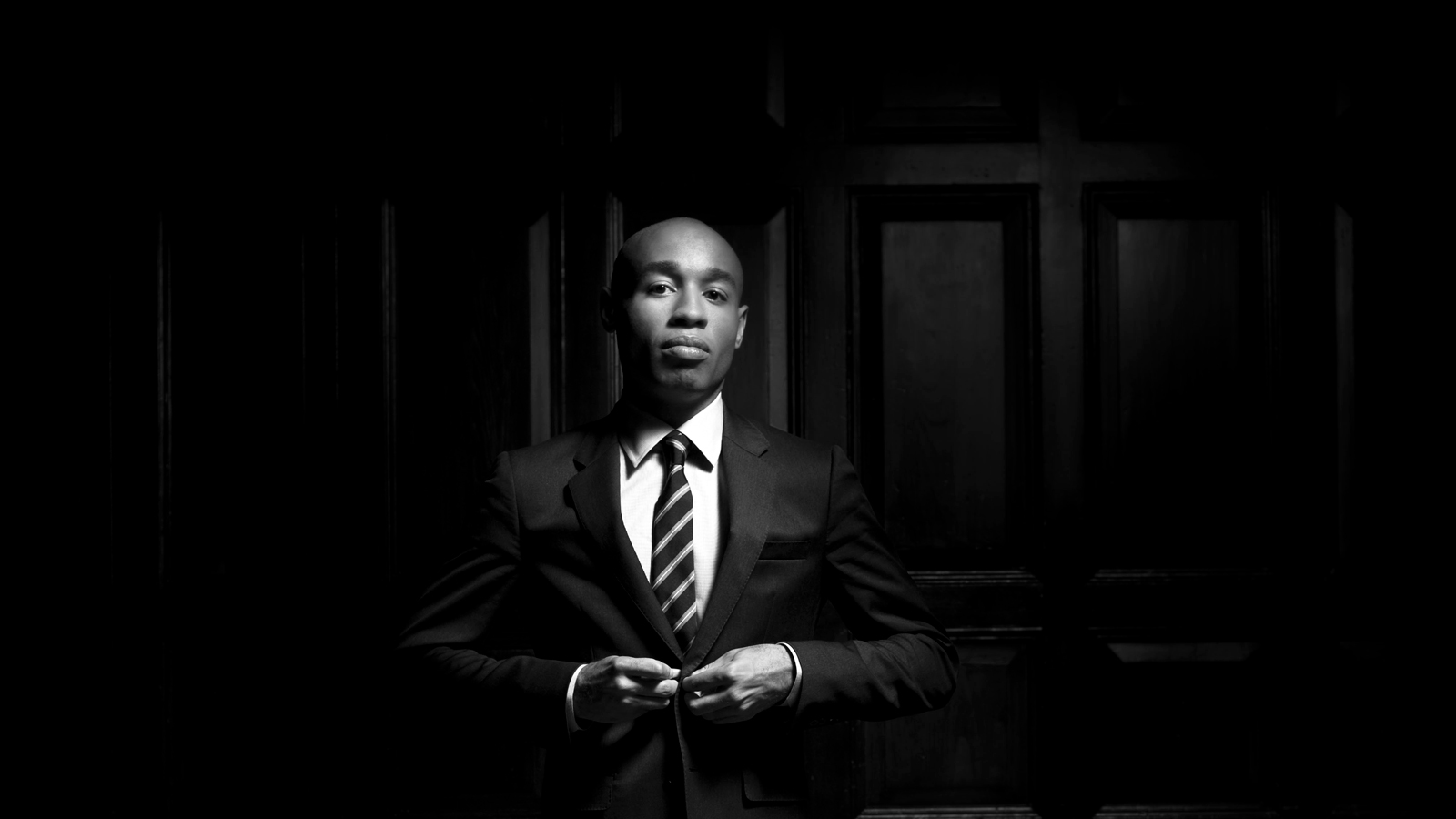 Aaron said that Rhapsody “is a staple of American music, and one of the early experiments in combining European concert music with the nuances of American jazz. As with pretty much anything George Gershwin wrote, the melodies are incredibly memorable; one of the reasons it has become an iconic piece in the canon.”

In an interview with the Wall Street Journal, he further explains that Gershwin “definitely set a gold standard for American popular songwriting…Jazz musicians, we use those songs all the time. All of these tunes are so rife with harmonic complexity and sophistication. We love that. The more chord changes or harmonic progressions there are, the more we can navigate in our improvisation.”

The challenge, he told the New York Times, is “creating this balance between the improvisation and the written score.”

We asked him for an example of someone who has influenced his approach:

“Marcus Roberts. He was really the first, in my opinion, to achieve an ideal balance of jazz language in the cadenzas, while maintaining the integrity of the piece. There is a recording from the 1990s called ‘Portraits in Blue,’ but there are also a number of YouTube videos, including with Seiji Ozawa and the Berlin Philharmonic (included here--video is poor but sound is good).

In March, Aaron formally visited the Library of Congress as a Jazz Scholar and was able to examine Gershwin’s manuscript of Concerto in F and Rhapsody in Blue and play the Gershwin piano in the Gershwin Room.

Asked to imagine a new artistic program around the piece, Aaron offers this tantalizing idea: “a performance with live painting/visual art by Cécile McLorin Salvant.” Bring it on! 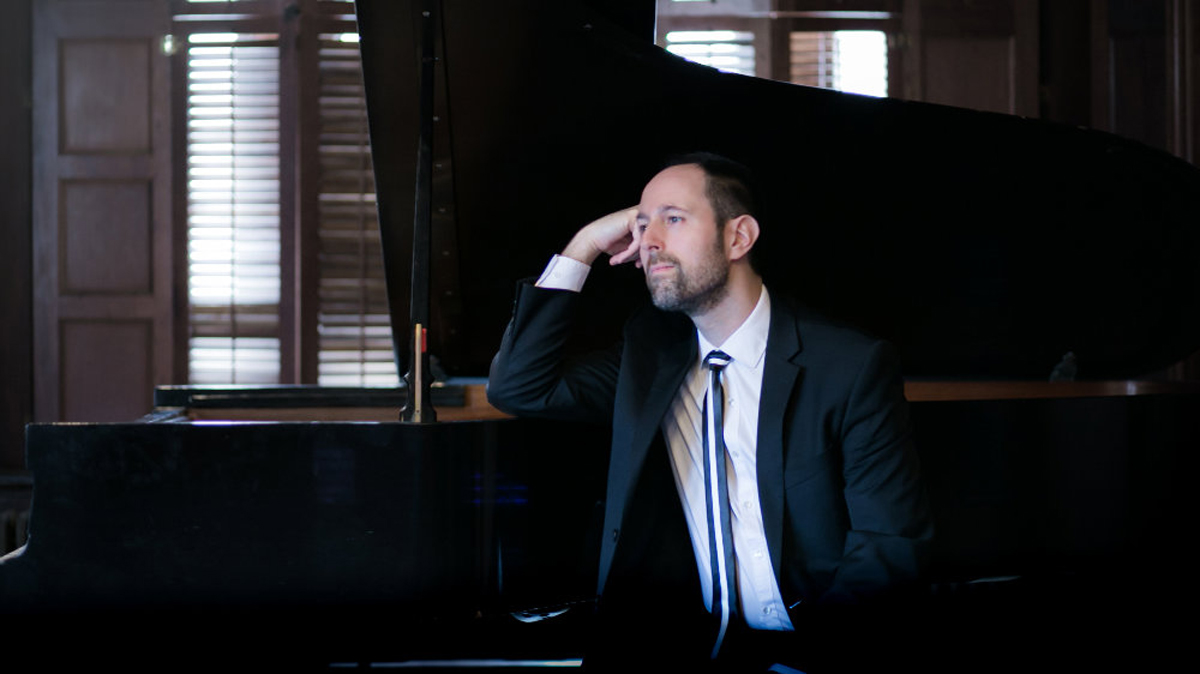 Spencer Myer won the 2006 American Pianists Awards. He plays a wide ranging repertoire and has recorded albums with works by composers from Brahms to Bolcom. He joined the Indianapolis Chamber Orchestra for a performance of Rhapsody in Blue in 2013 and had this to say at the time:

Rhapsody in Blue is one of my favorite works to perform.  It combines an unquestionable influence from classical traditions with an improvisational style looking forward to jazz.  I love the orchestral interjections, the great solo lines from the various instruments.  It is a showcase of Gershwin’s gift of melody as well as his sharply-etched, driving rhythms.  The jazz elements allow for the soloist to feel somewhat less constrained than he/she might feel in the classical repertoire; this makes for an all-around fun experience for soloist, conductor, and orchestra alike.

Now that his fellow Awards winner Drew Petersen will also play the piece with the Indianapolis Chamber Orchestra, we asked Spencer for some additional commentary:

"Growing up in America, I identify with the music of Gershwin -- and especially Rhapsody in Blue -- as a language I’ve known since I learned to walk.  The rhythms, the harmonies, the textures -- it’s all intertwined with the styles with which I grew up: pop music, jazz, ragtime, etc.  So, quite simply, it feels like home!"

"Leonard Bernstein’s performance conducting from the piano is the recording with which I grew up, and will always be my favorite.  His amazingly sharp (and at the same time so beautifully free) rhythm brings the piece to life better than any recording I know."

"If I were to shape an artistic program around Rhapsody in Blue, I think I might conceive it as a dramatic presentation of sorts, where the solo instruments of the orchestra are placed prominently onstage as characters in the narrative. I’m often saddened that instrumentalists that play such an integral part in the piece -- the concertmaster and clarinetist -- are somewhat hidden in the orchestra. Why not feature them for the audience’s eyes as well as ears?"

Drew Petersen performed Rhapsody in Blue with the Indianapolis Chamber Orchestra and Dance Kaleidoscope on May 17-19, 2019.