On November 6, 2019, we are honoring the 47 artists we have helped along the way with an Anniversary Concert featuring American Pianists Awards winners from each decade of our work. An introduction to each artist provides a peek at not only his or her growth but also the growth of the American Pianists Association. 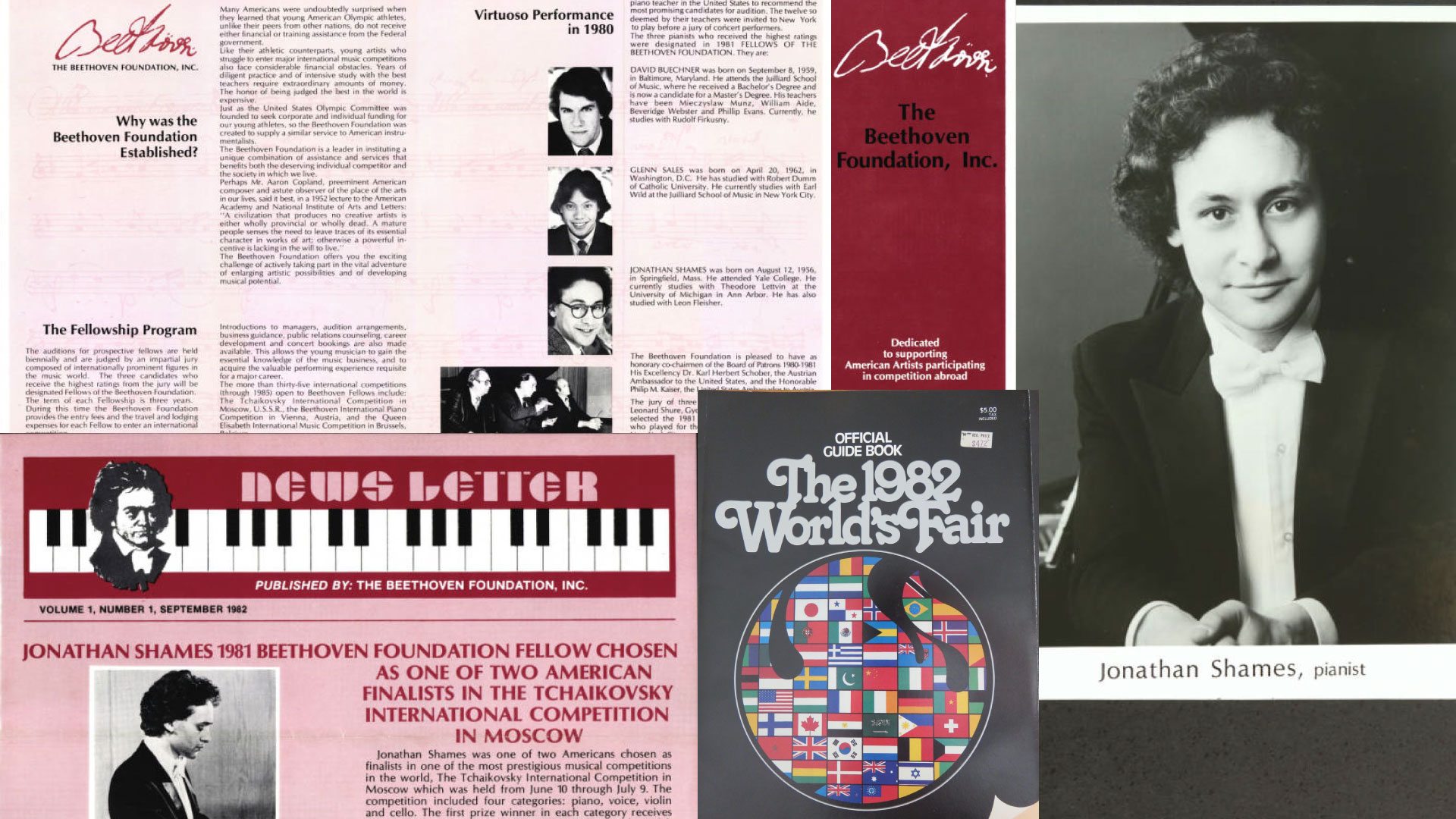 Let us start right after our founding. In 1980, the Beethoven Foundation (our former name) asked virtually every noted piano teacher in the United States to recommend the most promising candidates for audition. The twelve so deemed by their teachers were invited to New York the next year to play at the National Piano Auditions before a jury of three distinguished concert pianists—Leonard Shure, Gyorgy Sandor and Lorin Hollander at WQXR Auditorium in New York City. Three pianists were named the first Fellows of the Beethoven Foundation: David Buechner, Glenn Sales and Jonathan Shames.

The mission of the Foundation at the time was to support American pianists participating in competitions abroad, and in July 1982 Shames appeared in the Seventh Tchaikovsky Competition. After performing two concertos with the Moscow Radio Orchestra, he was one of two Americans chosen as finalists in the competition and awarded a diploma.

In 1982, the Foundation moved its national headquarters to Indianapolis, Indiana, in part due to the personal ties to the city of two of its founders, Borge and Tony Habig of Kimball International. 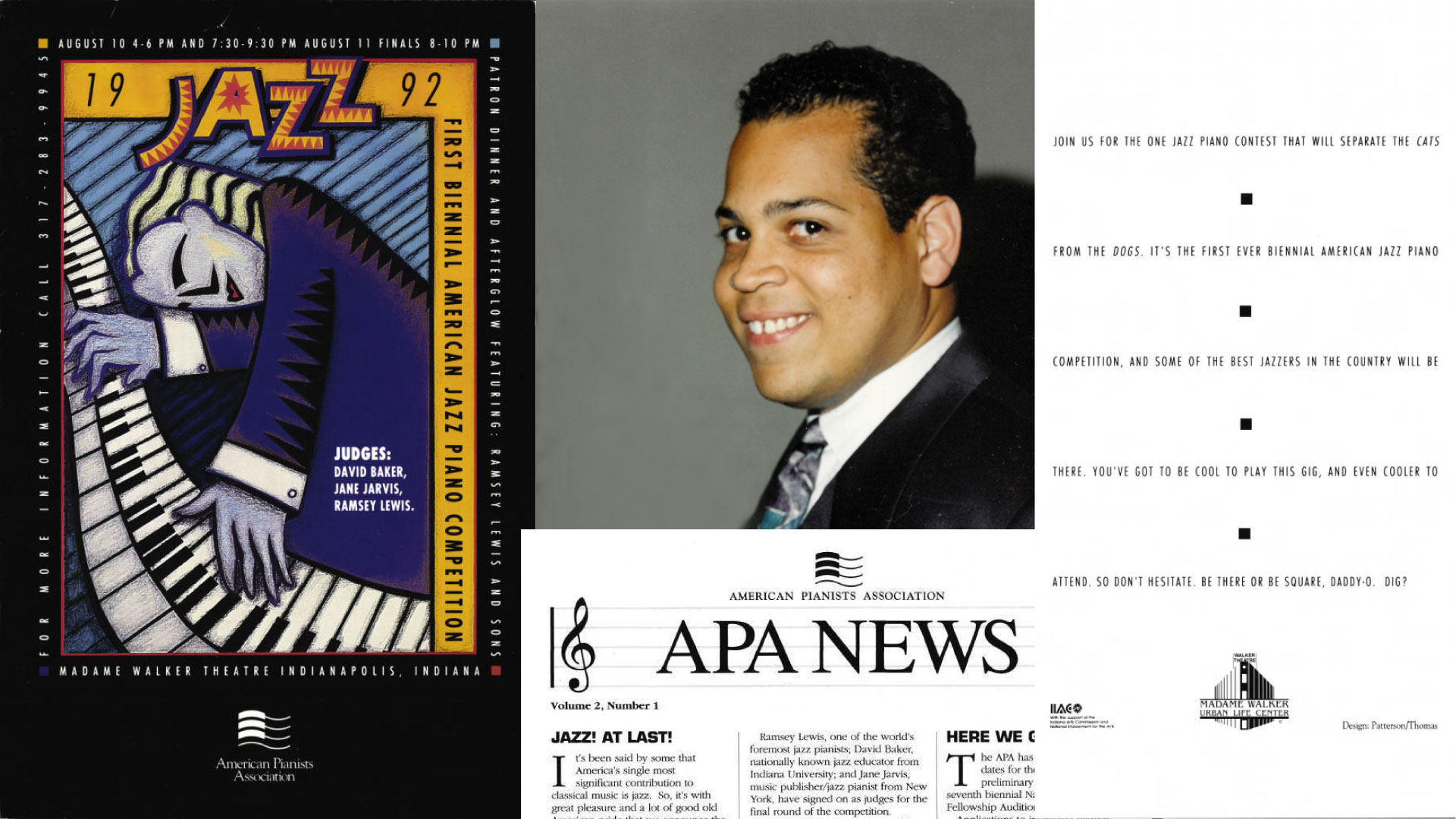 We changed our name to American Pianists Association in 1989 as a hint of things to come. In 1992, we delivered the story in our newsletter:

It’s been said by some that America’s single most significant contribution to classical music is jazz. So it’s with great pleasure and a lot of good old American pride that we announce the first American Pianists Association Biennial Jazz Piano Competition.

Janet Rost, the Executive Director at the time said, “One of the reasons the Beethoven Foundation changed its name three years ago was so that it could expand its program to all pianists, not just classical pianists. We’ve been working toward this announcement ever since we changed our name.”

The Jazz Competition also fulfills a long-time wish of national advisory board member and eminent jazz pianist Dr. Oscar Peterson who when the APA announced its name and mission change said, “I firmly believe that an organization of this kind—with the commitments that you have to the aiding of talented players, whether classical or jazz—can only serve to enhance the caliber of players that America produces in both categories. This has always been a silent wish of mine.”

Semi-finals were August 8, 1992 and the finals were on August 11 at the historic Madam Walker Theatre downtown Indianapolis. The jury members were jazz pianist Ramsey Lewis; musician, composer and educator David Baker; and jazz pianist, Musak programmer and organist for the New York Mets (!!!), Jane Jarvis. 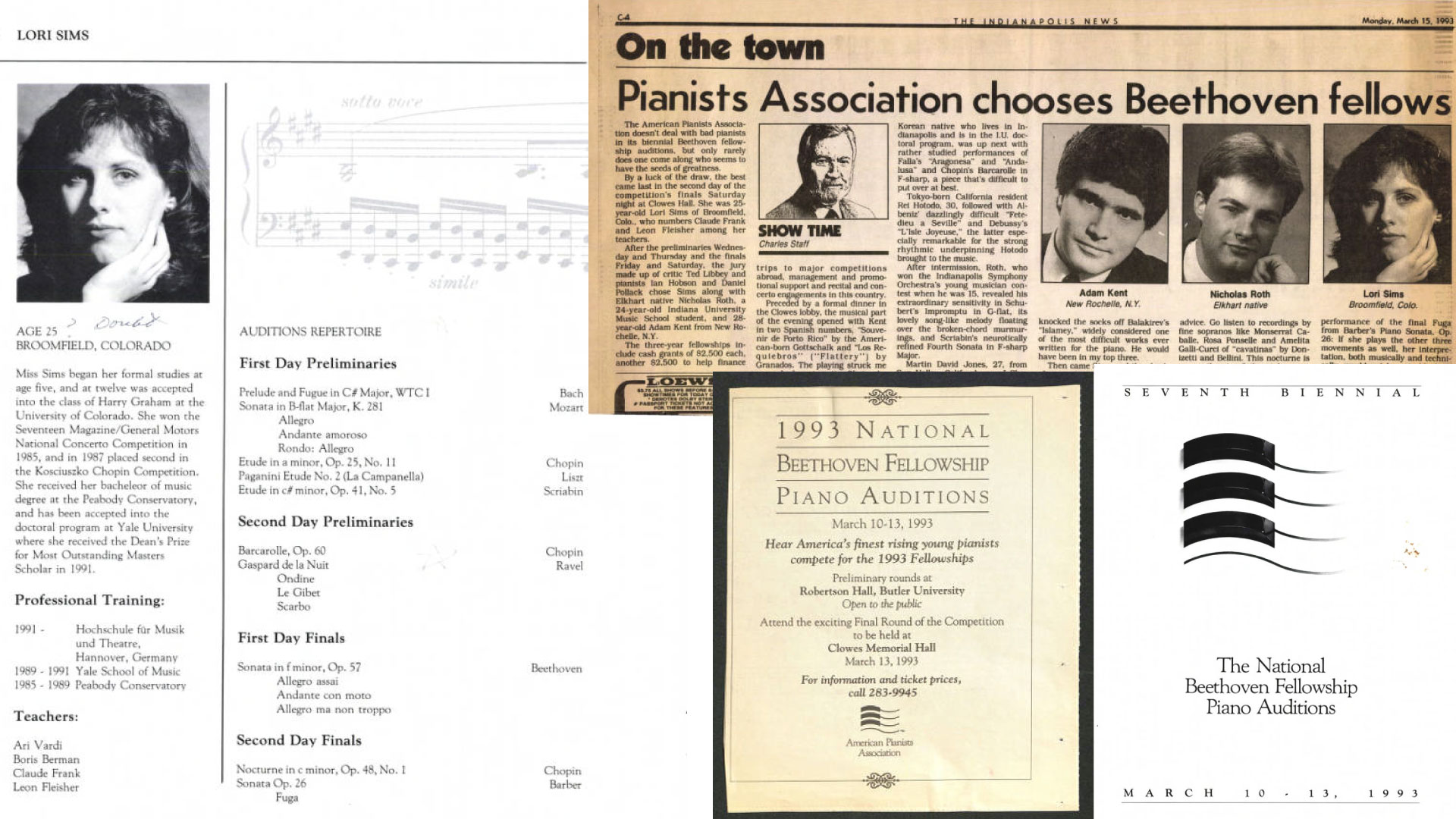 The Indianapolis News noted, “By luck of the draw, the best came last in the second day of the competition’s finals Saturday at Clowes Hall. She was 25-year-old Lori Sims of Broomfield, Colo. who numbers Claude Frank and Leon Fleisher among her teachers.” 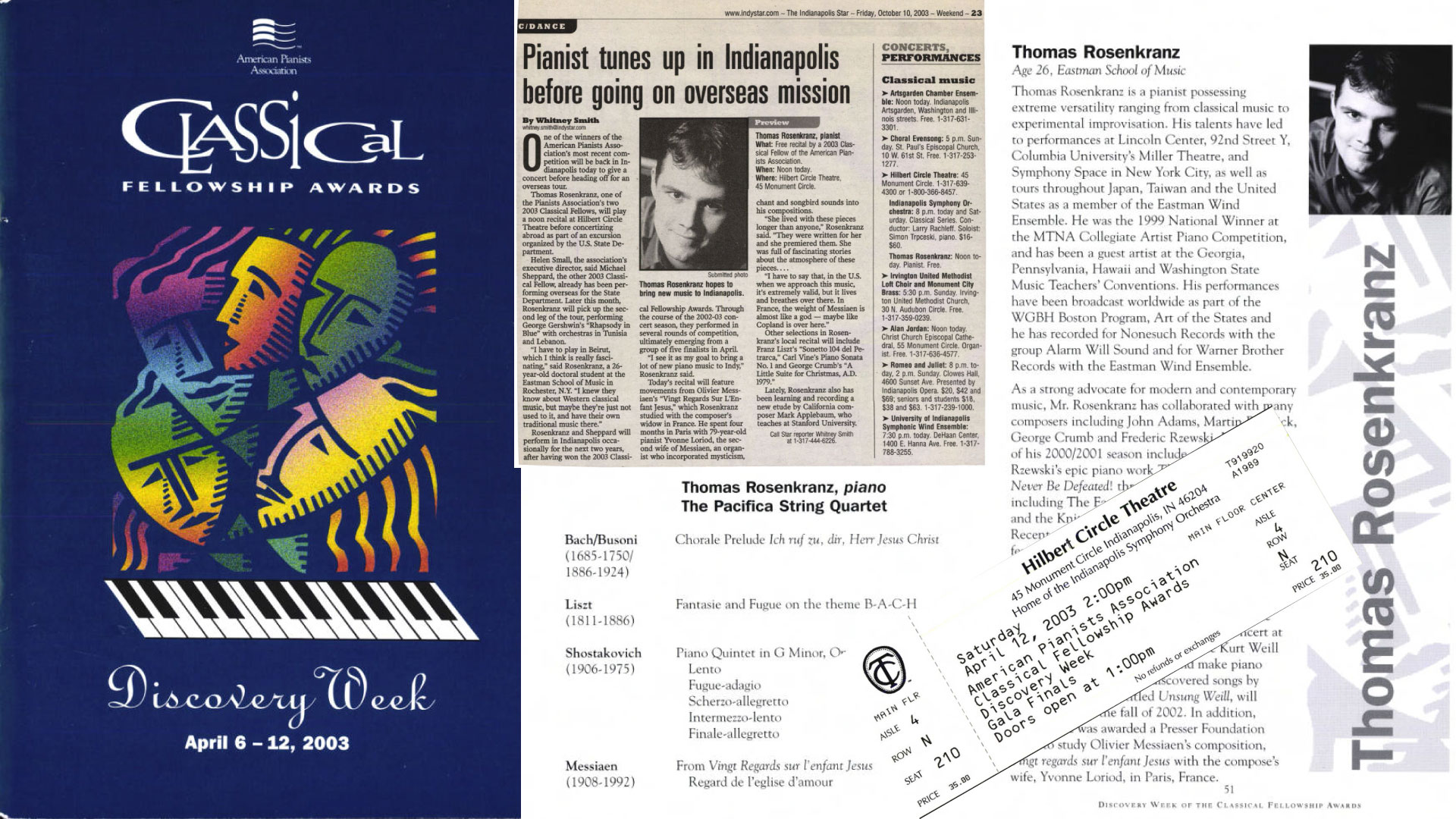 In 2001, Dr. Joel Harrison joined the organization as Artistic Director. Beginning in 2003, Dr. Harrison and fellowship winners have toured under the auspices of the Cultural Programs Division of the U.S. Department of State. One of the first to participate in this program was 2003 American Pianists Awards winner Thomas Rosenkranz, who was not new to international travel.

During Discovery Week (the final week of the 2003 Awards), Rosenkranz performed Olivier Messiaen’s “Vingt Regards Sur L’Enfant Jesus” on his way to winning the competition. It turns out he had an astonishing level of preparation for the piece: Rosenkranz had studied with the composer’s widow in France. He spent four months in Paris with 79-year-old Yvonne Loriod, the second wife of Messiaen, an organist who incorporated mysticism, chant and songbird sounds into his compositions. In an interview with the Indianapolis Star he said, “She lived with these pieces longer than anyone. They were written for her and she premiered them. She was full of fascinating stories about the atmosphere of the pieces…” 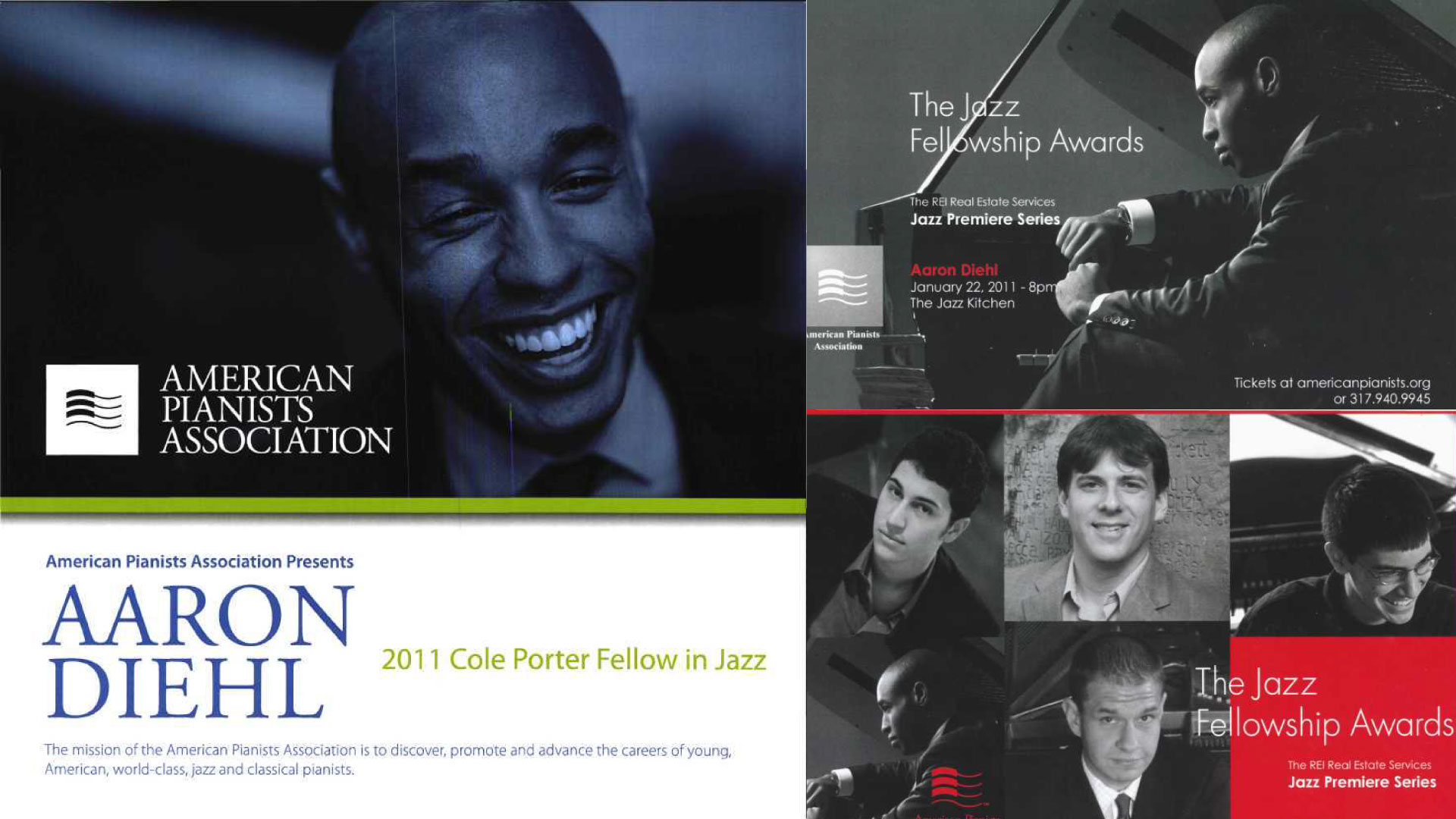 Semi-finals took place over two sets on April 15 at The Jazz Kitchen. The final round was judged on April 16 at the Athenaeum, where each pianist performed with Dee Dee Bridgewater, followed by a contemporary jazz standard accompanied by the Buselli Wallarab Jazz Orchestra.

Columbus, Ohio native Aaron Diehl took home the big prize of the night. Talking afterward with Keyboard Magazine he stated, "Reflecting on the overall process, if it was not for the encouragement of pianist Adam Birnbaum (the 2004 Awards winner), I would not have even applied! I had tried twice previously and never did make it to the Semi-Finals. I thought 'Why try again?' Adam showed me how important it was to support each other as developing artists.” 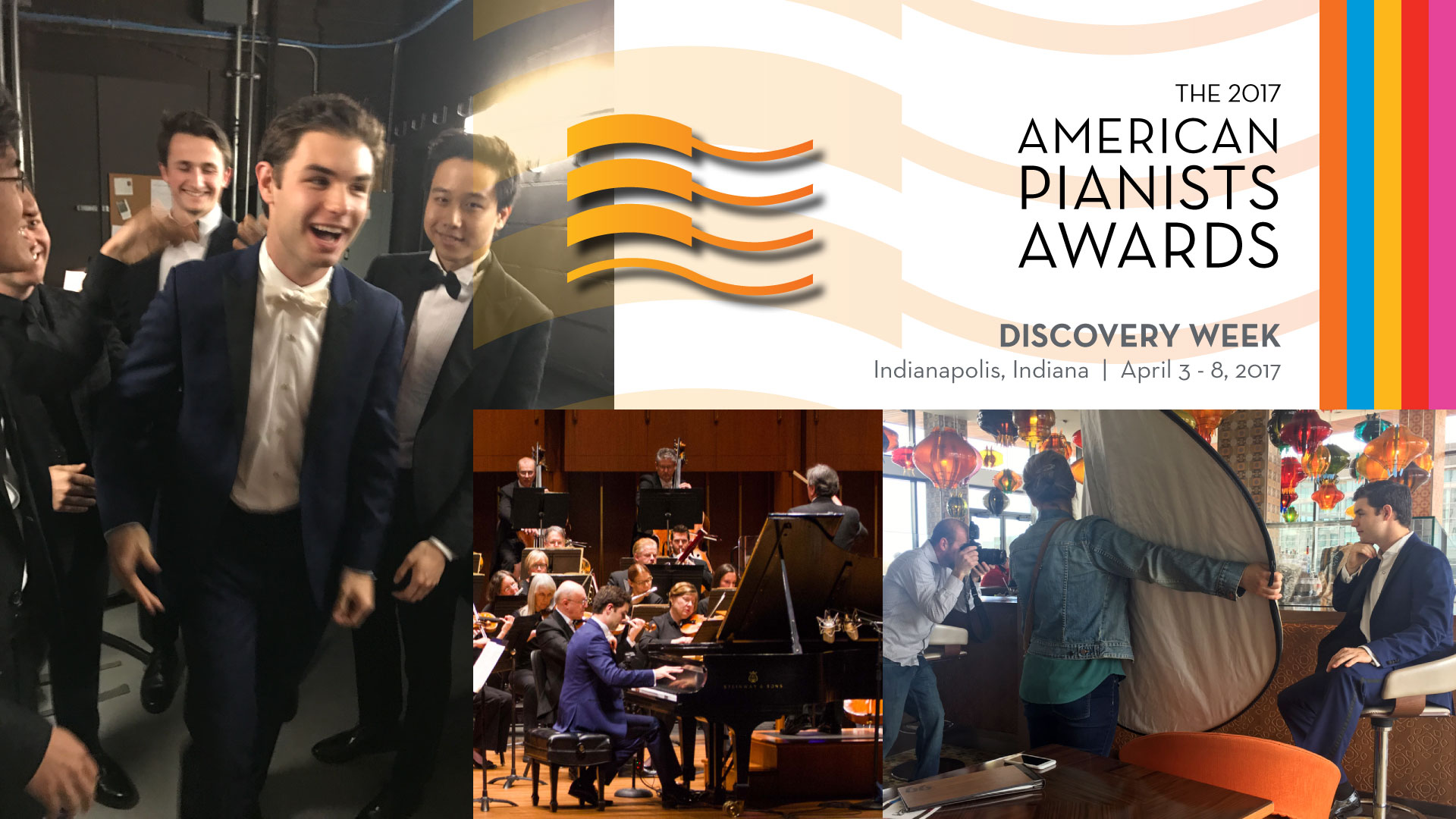 In 2017 the five finalists performed Discovery Week concerts with Andrew Garland, Jessica Rivera, Pacifica Quartet and the Indianapolis Symphony Orchestra under the baton of Gerry Schwarz.

Drew Petersen’s performance of Prokofiev’s Concerto was a perfect ending to his campaign to become the 46th Awards winner. Since that date he has toured internationally, received an Avery Fisher Career Grant, recorded an album on the Steinway & Sons label and signed a professional management contract with Opus 3 Artists.