Robert Schumann described Chopin’s music as “cannons buried in flowers”—a sonic garden filled with strange and exquisite flora, and imbued with a mysterious potency. Even from the start this Polish composer, gifted and idiosyncratic, created works that reflected this subtle complexity. His music is filled with paradox: elegant and lyrical, classically proportioned yet lushly Romantic, rooted in the fertile soil of his homeland. Performing it is a balancing act between each of these elements. 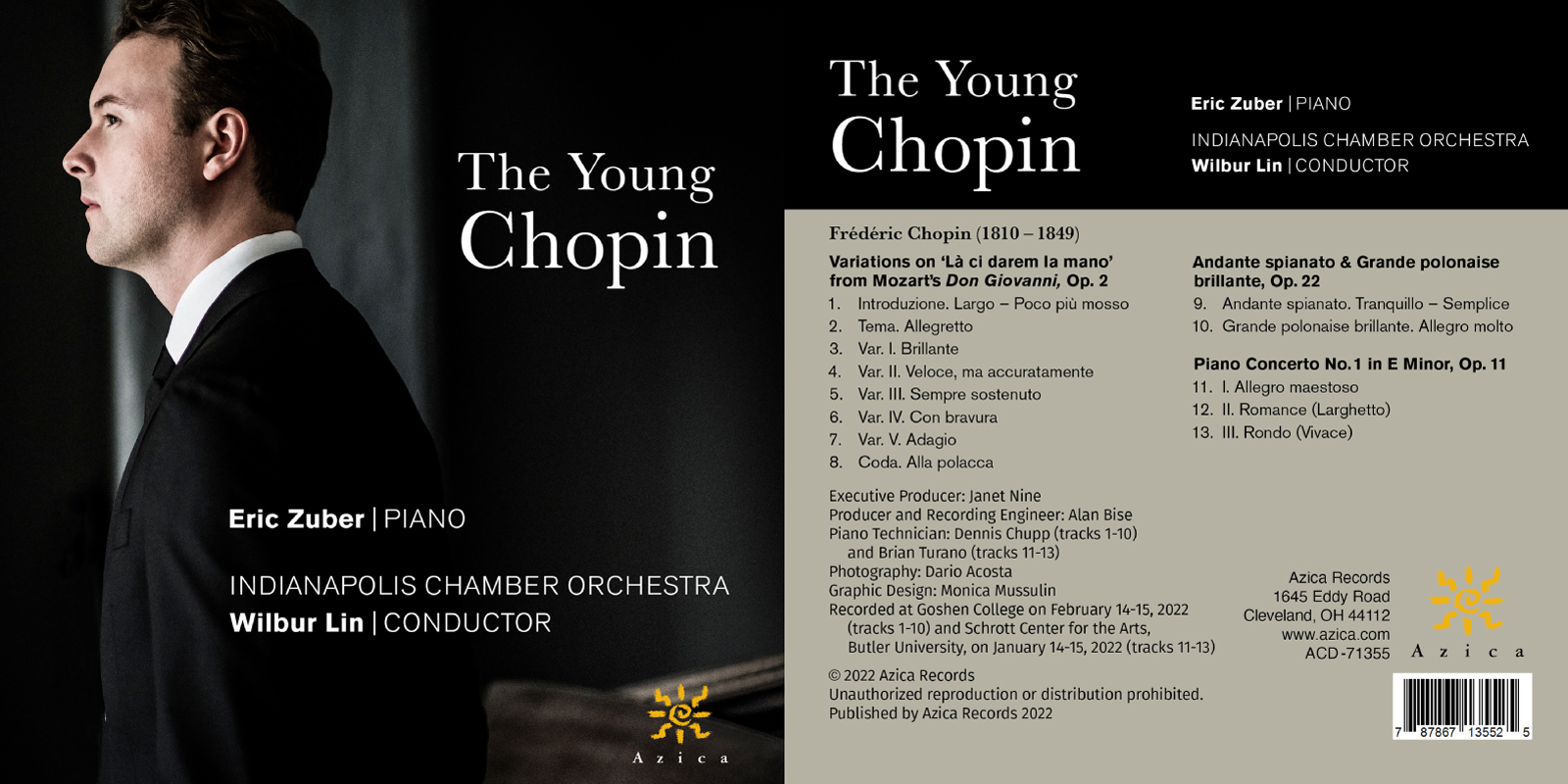 Pianist Eric Zuber is attracted to yet another aspect of Chopin’s legacy: the technical command required to pull it off. “I thought that it would be interesting in this debut album to explore some of the repertoire that Chopin composed as a very young man,” he explains, “when he was flexing his pianistic muscles, so to speak, before he retreated to a life of mainly composition and teaching.”

That second act flourished after it became apparent that, despite his pianistic proficiency, this delicate performer was not well suited to the large concert hall. Berlioz noted that Chopin’s tone was so soft that “one is tempted to go close to the instrument and put one’s ear to it as if at a concert of sylphs or elves.” Yet, his friend and rival Franz Liszt found that his sound was “perfect in the extreme.” In order to produce that “perfection,” he developed an entirely new technique of flexibility at the keyboard.

“The ingenuity of the piano writing shows a complete technical understanding of the craft of the instrument, and the seductive beauty of his melodic and harmonic writing is second to none,” notes Eric Zuber. “And to think he was only 17 when he wrote the variations as a school assignment! These early compositions are tremendously difficult from a technical perspective, and Chopin was clearly seeking to showcase his abilities as a pianist. Yet, there is little of the empty displays of virtuosity that appear in the works of some of his contemporaries. Everything serves a purpose to create a clear emotional effect.”

Composer Stephen Heller noted that Chopin’s slim hands would “suddenly expand and cover a third of the keyboard like a serpent opening its mouth to swallow a rabbit whole.” Hints of this can be detected even in his early Variations on “Là ci darem la mano” from Mozart’s Don Giovanni, Op. 2, written in 1827 for piano and orchestra, where alternating musical patterns were likely played by him without lifting his hands off the keys. The composer often played these Variations without orchestra. This is the work that inspired Schumann’s famous declaration: “Hats off, gentlemen, a genius!”

Of course, doing justice to such pieces requires more than mere finger dexterity. In this recording, Eric Zuber captures the sweeping lyricism of the music, its cries and whispers, without ever resorting to emotional exaggeration. The music is of course cleanly executed and the composer’s intricate filigree well-shaped; he maintains a clear sense of architecture as the music surges and ebbs, by turns tender, introspective, vigorous, or passionate. Crucially, he plays all these works with a sensitive understanding of their affect.

Throughout, as Liszt noted, one can sense in Chopin’s art a “deep melancholy,” saturated with the long-suffering Polish spirit. Indeed, when Chopin left Poland it was at a time of national mourning. Its cultural leaders had fled in the wake of the failed 1830 “November uprising” in Warsaw against Russian domination. And, like Chopin, many of them—such as poets Juliusz Slöwacki and Adam Mickiewicz, both national treasures— headed to Paris. It was a place of creative ferment, where Chopin would find kindred spirits, and students with money.

(Chopin was so impressed on first hearing Kalkbrenner—a man Mendelssohn dismissed as nothing but a “little fish patty… an indigestible sausage”—that he actually considered taking lessons from him. But Kalkbrenner’s suggestion to Chopin that he cut passages from one of his piano concertos seemed dead wrong and alarmed the composer’s Warsaw teacher, Jozef Elsner. Luckily, his family dissuaded Chopin from studying with Kalkbrenner, which might well have robbed him of his uniqueness. “He offered to take me as a pupil for three years, and to make a great artist of me,” Chopin reported. “I replied that I knew very well what were my deficiencies; but I did not wish to imitate him, and that three years were too much for me.”)

The young Chopin wrote his Andante spianato et grande polonaise brillante, Op. 22, between 1830 and 1834. The Grande polonaise brillante in E-flat, set for piano and orchestra, was written first, in 1830-31. Then, in 1834, Chopin wrote an Andante spianato in G, for piano solo, which he added to the start of the piece, joining the two parts together with a fanfare-like sequence. The combined work was published in 1836, and dedicated to Madame d’Este. Eric Zuber plays it here as a piano solo.

[Editor's note] here is a take of Andante spianato from the recording session (audio from the hall--not the mastered album):

Finally, rounding out these early Chopin works is the First Piano Concerto, Op. 11, written in 1830. It is dedicated to the aforementioned Kalkbrenner. Premiered in Warsaw as one of Chopin’s farewell concerts before he left Poland, it was a huge success. (This “first concerto” was actually the second one he wrote, after the F minor Concerto, which is traditionally labeled Concerto No. 2.)

At the first performance there was “an audience of about 700,” according to the Warsaw Courier, with Chopin at the piano. The piece was followed by “thunderous applause.” It was seven weeks later, in Paris, following the armed uprising back home by people of Lithuania, Belarus, and Ukraine against the Imperial Russian Army, when Chopin played his concerto for the first time in France at the Salle Pleyel, where it was again well received. Belgian critic François-Joseph Fétis wrote in La Revue musical the next day that “There is spirit in these melodies, there is fantasy in these passages, and everywhere there is originality.”

For Eric Zuber, “there’s a simplicity and honesty in this music written by the twenty-year-old Chopin that has the remarkable ability to transport the listener back in time, perhaps conjuring memories of a youthful romance, or a blissful time in one’s life. Chopin himself wrote that he hoped the middle movement of his First Piano Concerto would ‘give the impression of someone looking gently towards a spot that calls to mind a thousand happy memories.’ That, to me, is in large part why this music has been cherished by audiences for nearly 200 years, and is why I continue to be moved by it.”