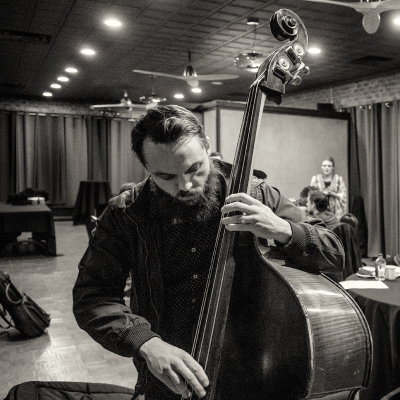 Bassist Nick Tucker is an active freelance musician in Central Indiana and has been the house bassist for the American Pianists Awards jazz competition since 2014. He currently resides in his hometown, Indianapolis. Nick performs extensively in all areas of music with numerous jazz, Latin, and rock groups in Indianapolis and throughout the Midwest. He has performed with Miguel Zenón, Rich Perry, Alan Pasqua, Randy Brecker, Mike Clark, Bobby Watson and Stefon Harris, among many other jazz greats. Nick has performed all over the United States, as well as in Europe and South America.

He earned his Bachelor’s in Jazz Studies and Music Recording/Technology from the University of Indianapolis and a Master’s in Jazz Studies from Indiana University in Bloomington. Nick is an alumnus of the Stean’s Institute Jazz Program at Ravinia where he studied with David Baker, Curtis Fuller, Rufus Reid and Nathan Davis. He co-leads the Tucker Brothers with his brother Joel.