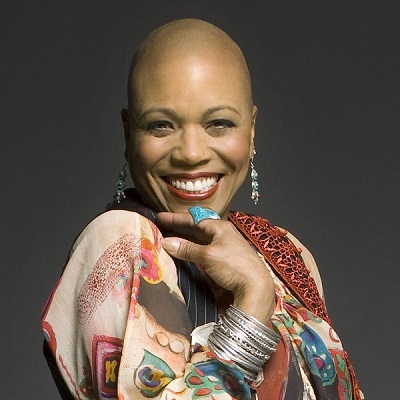 Over the course of a multifaceted career spanning four decades, Grammy and Tony Award-winning Jazz giant Dee Dee Bridgewater has ascended to the upper echelon of vocalists, putting her unique spin on standards, as well as taking intrepid leaps of faith in re-envisioning jazz classics.  Ever the fearless voyager, explorer, pioneer and keeper of tradition, the three-time Grammy winner most recently won the 2011 Grammy for Best Jazz Vocal Album for Eleanora Fagan (1915-1959): To Billie With Love From Dee Dee.

Bridgewater’s career has always bridged musical genres. She earned her first professional experience as a member of the legendary Thad Jones/Mel Louis Big Band, and throughout the 70’s she performed with such jazz notables as Max Roach, Sonny Rollins, Dexter Gordon and Dizzy Gillespie. After a foray into the pop world during the 1980s, she relocated to Paris and turned her attention back to jazz. Bridgewater began self-producing with her 1993 album Keeping Tradition (Polydor/Verve) and created DDB records in 2006 when she signed with the Universal Music Group as a producer (Bridgewater produces all of her own CDs).  Releasing a series of critically-acclaimed CDs, all but one, including her wildly successful double Grammy Award-winning tribute to Ella Fitzgerald, Dear Ella - have received Grammy nominations.  Artist Theo Croker is signed to DDB Records and Irvin Mayfield and the New Orleans Jazz Orchestra also recorded a project with Dee Dee released by her label in 2014.

Bridgewater also pursued a parallel career in musical theater, winning a Tony Award for her role as Glinda in The Wiz in 1975. Having recently completed a run as the lead role of Billie Holiday in the off-Broadway production of Lady Day, her other theatrical credits include Sophisticated Ladies, Black Ballad, Carmen, Cabaret and the Off-Broadway and West End Productions of Lady Day, for which Bridgewater received the British Laurence Olivier Nomination for Best Actress in a Musical.

As a Goodwill Ambassador to the United Nations’ Food and Agriculture Organization (FAO), Bridgewater continues to appeal for international solidarity to finance global grassroots projects in the fight against world hunger.